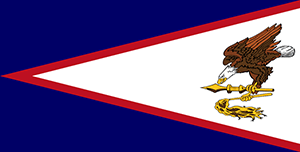 American Samoa is made up of six islands and located about 3,500 kilometres Southwest of Hawaii. The Samoan culture “fa’asamoa” or the “ways of Samoa”, is the oldest in Polynesia at about 3,000 years old.

American Samoa’s rich landscapes include national parks on three separate islands. The National Park of American Samoa is 13,500 acres with 4,000 of that made up of ocean and coral reefs. It has fruit bats, subsistence farming, over 35 species of birds, and more.

Do I Need Vaccines for American Samoa?

Do I Need a Visa to Travel to American Samoa?

A visa is not needed for stays in American Samoa under 30 days. Passports must have at least six months validity. Proof of onward travel is necessary for entry.

American Samoa has a warm, wet, tropical climate with rain and high temperatures all year round. Average temperatures range from 20 to 30 degrees.

Though rain can come at any time, it is more frequent from October to May. Rain can come for a few minutes or a few days. There is typically more rainfall in the higher mountain regions.

The June through September dry season is the drier and cooler part of the year.

November to April is hurricane and cyclone season.

American Samoa has stronger trade winds from May to October.

How Safe is American Samoa?

As a part of the United States, American Samoa is relatively safe. But, there are some items to be aware of.

Many secondary roads are made mainly from dirt and beach and are not steady for cars to motor on. These roads are often used by pedestrians and livestock.

Petty and violent crimes do occur in American Samoa. Keep yourself and your belongings safe at all times. Culture in American Samoa is quite conservative, particularly in regards to homosexuality.

Don’t interact with stray dogs in case they become aggressive with you.

Be aware in case of earthquakes, tsunamis, cyclones, flooding, and landslides.

The National Park of American Samoa is not just for preserving land or animals. It is also home to the 3,000 year old “fa-asamoa” or “ways of Samoa” culture and traditions. Visitors can enjoy a quiet but vibrant experience spread out over three volcanic islands. The reserved area covers 13,500 acres – 4,000 of which is made up of ocean and coral reefs.

Subsistence farming on small plantations in the part is common. You can meet the many villagers who live on the islands and/or relax on the serene, remote seaside regions.

What Should I Pack for American Samoa?

Embassy of the United Kingdom in American Samoa

If you are in American Samoa and have an emergency (for example, been attacked, arrested or someone has died) contact the nearest consular services. Contact the embassy before arrival if you have additional questions on entry requirements, safety concerns or are in need of assistance.

While there is no consulate or embassy in American Samoa, it is served by the British consulate in Los Angeles: