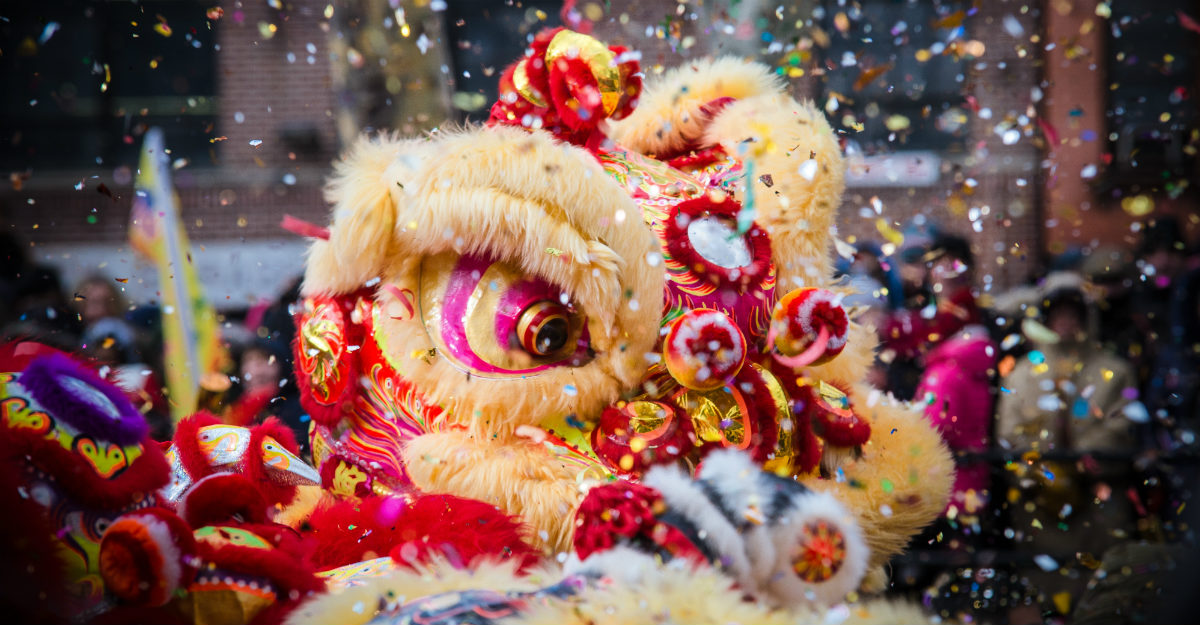 The Lunar New Year, also known as the Chinese New Year and the Spring Festival, is just a couple weeks away.

The Chinese New Year dates back nearly 4,000 years and originated to raise sacrifices to the agricultural gods and ancient ancestors. This was a way of honoring them for sustaining the Chinese people for another year. Emperor Wudi of the Han Dynasty set the date from the lunar calendar. More than celebrating a turn of the calendar, the event signifies the beginning of the planting season.

The celebration may only land on one day, but the new year’s festival is a massive event covering 15 days.

It’s so vital to the Chinese culture that many citizens trek to their hometown and visit their families. New Year’s Eve family dinner is especially important, with the whole family expected to come. According to Travel China Guide, the largest human migration happens every year during the Lunar New Year.

Even Chinese natives living outside the country partake in the even and spend time with loved ones. The entire country of China is on holiday.

Throughout the vast country there are countless small villages, bustling metropolises and surrounding towns. Below are a few of the best locations to visit in China during this one-of-a-kind celebration: 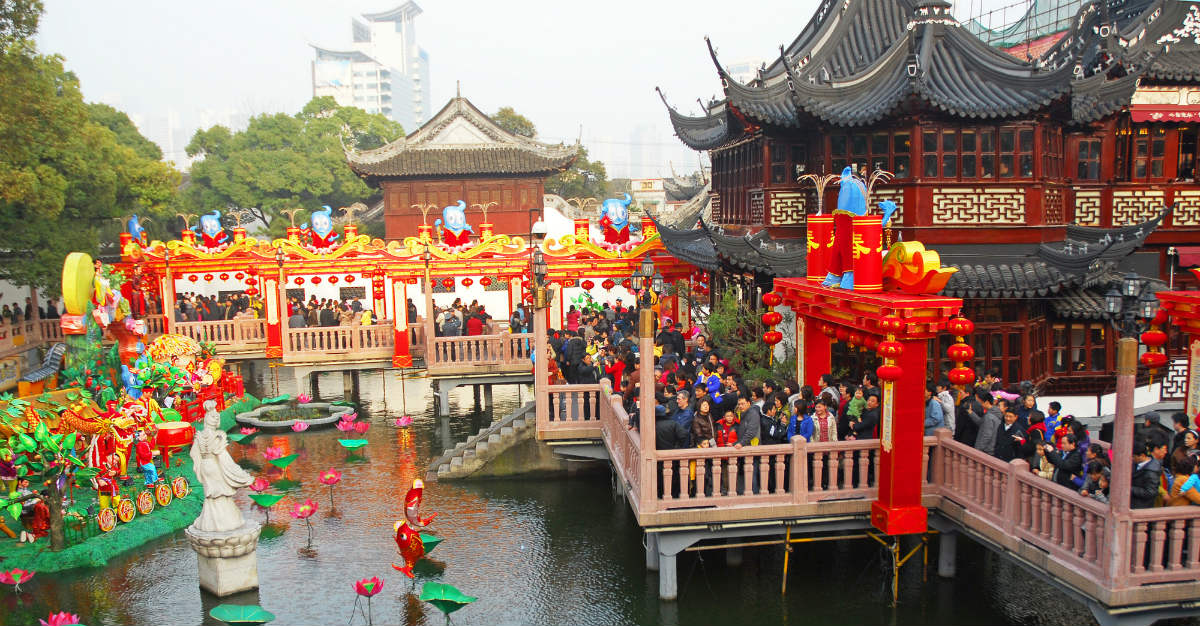 It may not come as a surprise that China’s largest city goes big for this grand event. But, as one of the busiest ports and home to over 22 million people, Shanghai is an easy choice for the Lunar New Year.

There are many temples all over China, but the Longhua Temple Celebration is unique only to the city of Shanghai.

The Longhua Temple is the oldest of its kind and has the honor of starting the Lunar New Year. They begin the festivities with monks that climb the temple’s pagoda and hit the bell at midnight. Along with signifying a new year, the Chinese believe that striking the bell drives evil spirits away.

Another celebration that is distinctive to the city of Shanghai is the Yu Gardens Lantern Festival. Differing from the events at Longhua Temple, this bash signifies the end of the Spring Festival.

The celebration also stretches to the activities and delicious food. During the Lantern Festival, people enjoy traditional Yuanxiao or ball dumplings in soup. Meanwhile, lantern riddles are also a regular part, along with Lion and Dragon Dances. 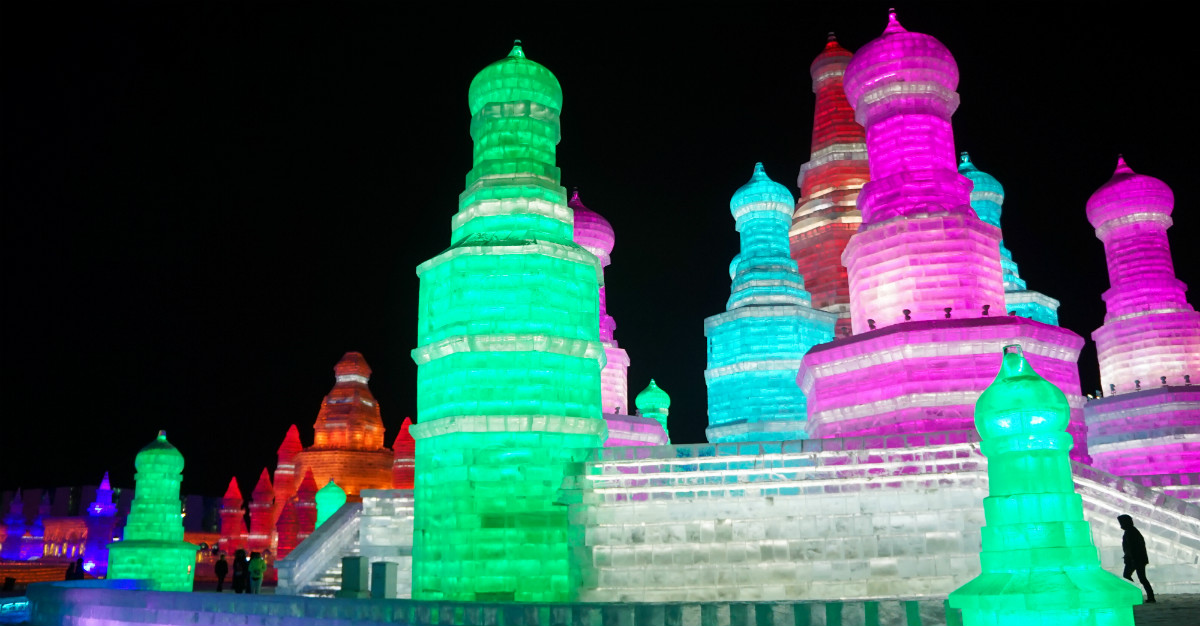 Harbin’s main tourist attraction during this time of year are usually the skiing resorts and other winter activities. But, all that cold-weather fun gets put to good use during the Lunar New Year. The city in China’s northernmost province hosts the Ice and Snow Festival every year.

The Ice Lantern Festival, more commonly known as the Harbin International Ice and Snow Festival is a wondrous sight to behold.

Over 10,000 workers bring in blocks of ice, and the festival spans approximately 600,000 square meters or about a quarter mile in area. One of the tallest ice sculptures stretches 46 meters, or about 151 feet into the air.

Sculptors also use special effects for their ice and snow masterpieces. Many of the structures involve LED lights that has brought a colorful new touch to the event. Some sculptures are of temples, skylines, churches, and even slides for children to slide down.

The only problem is finding time to visit all three venues at the festival. Each area houses different kinds of structures, all intended induce awe in the locals. 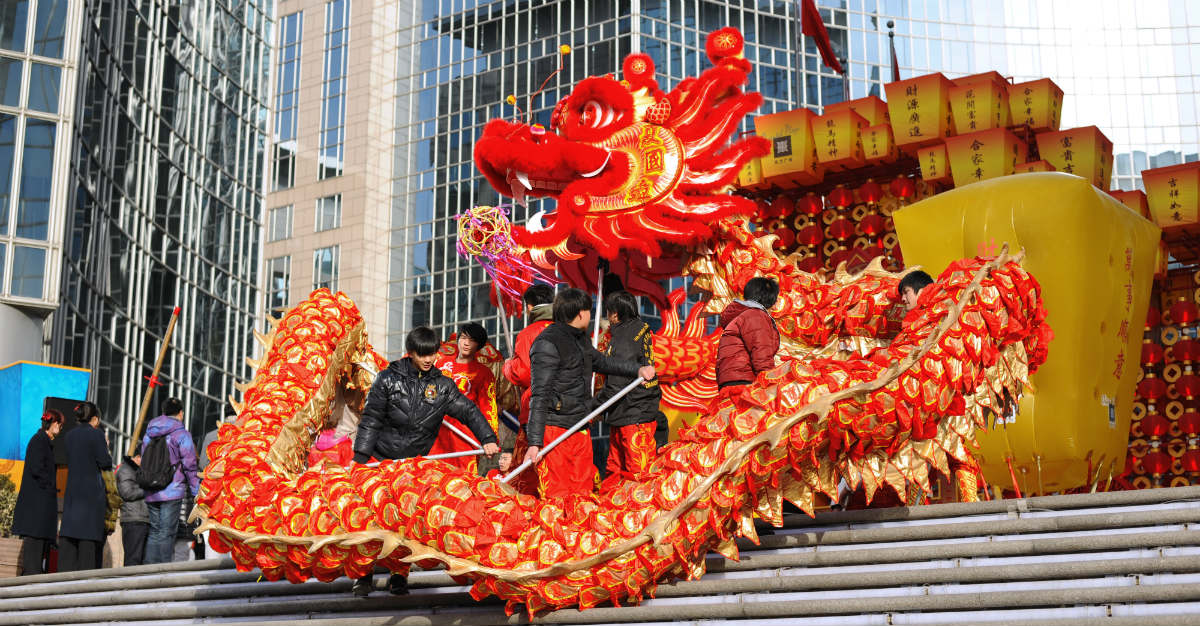 Covering almost 6,500 square miles, Beijing is host to dozens of parks and gardens. These are where the festivities take shape, lighting up with grand displays all with a unique theme.

One of the more notable, and specific, celebrations is held at Longtan Fair. The park becomes a home for competition, with locals volunteering to face off in various sports. The events can range from physical (martial arts and arm wrestling) to mental (chess). There’s even room throughout the park from rock climbers to compete against each other.

Beijing’s celebration finds a way to mix both modern and traditional Chinese culture. 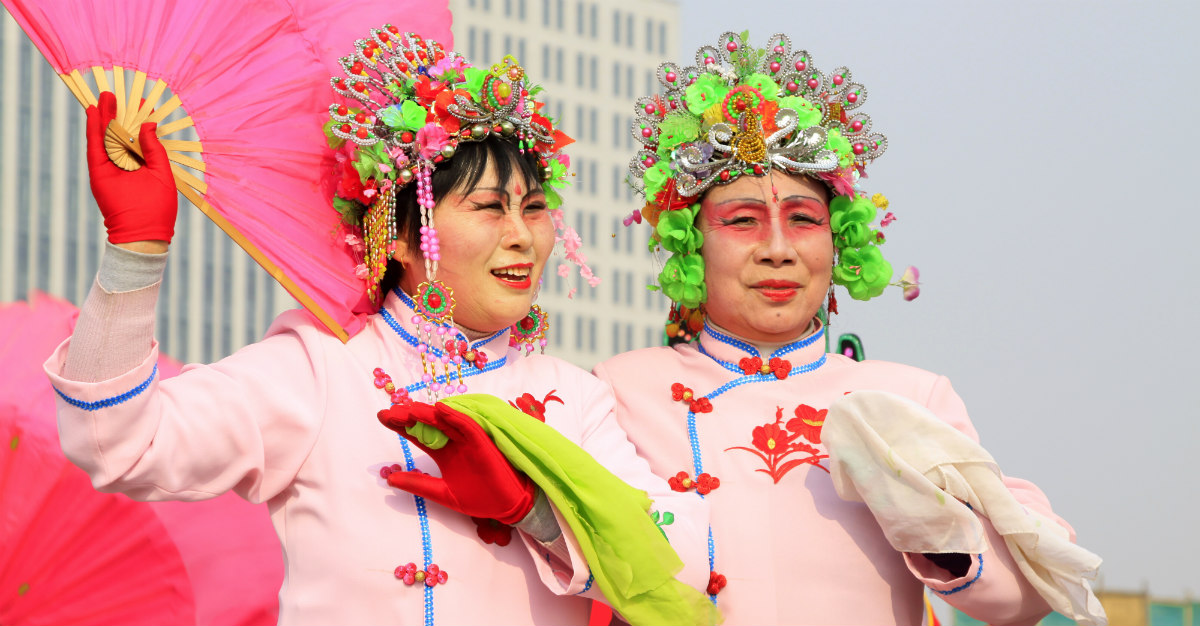 Nuanquan Town has a history dating back to the Ming Dynasty. At 22,000 inhabitants, the town likely seems small compared to others in the country.

The town may lack a giant population, but is rich with blacksmiths and subsequently, fireworks.

Nuanquan Town is home to fascinating firework display called dashuhua, or the “beating tree flowers.” For this event, the blacksmiths throw boiling hot molten iron at the city gates. When the molten iron hits the gates, beautiful, vibrant sparks provide the impressive lights.

The tradition stretches back over 500 years in the past when the blacksmiths wanted to celebrate the Chinese New Year but were too poor to buy fireworks. Only the wealthy could afford them. So, the blacksmiths used their scrap iron, melted it, and this is how the dashuhua tradition began.

No matter where you go in China for the Lunar New Year, make sure you’re dressed accordingly. Most of the nation of China will be dressed in red on the first day of the Spring Festival.

Not only does red symbolize happiness, strength, good fortune, and energy, but also resembles health, wealth, and prosperity. Locals also believe that hanging red banners with poems or proverbs on them will help protect from ghosts and evil spirits.

Many cities and town have grand firework displays during the celebrations. It is also customary that people pass out red envelopes with money inside as gifts. Children especially appreciate this gesture.

If in the area during the Lunar New Year, or want to see a nationwide celebration, make sure to check out the event.

Did we miss any must-see events for the Chinese New Year? Let us know in the comments, or via Facebook and Twitter.