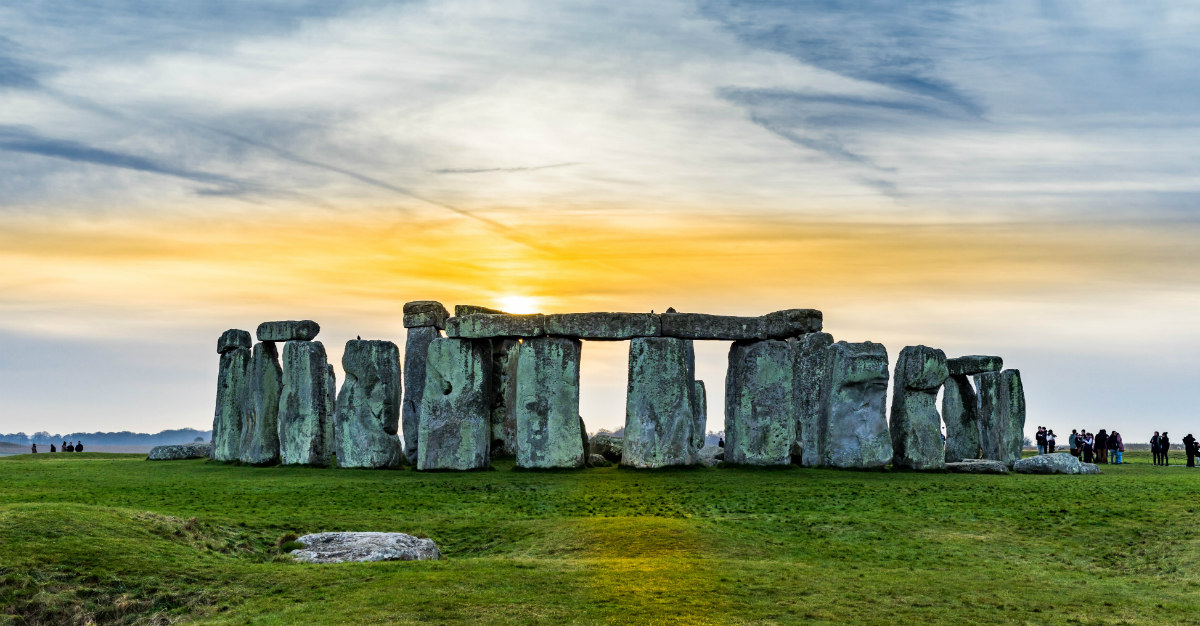 Located in Wiltshire, United Kingdom, Stonehenge remains both a marvel and a mystery. The site is now part of the World Heritage property as a symbol of prehistoric architecture.

Archaeologists believe that the mounds and monuments at Stonehenge date back to around 3700 – 1600 BC and represent the Neolithic and Bronze Ages. Other archaeologists speculate that the massive structures date back even further. The oldest estimates put Stonehenge around 6,300 years ago to the last Ice Age.

In recent years, archaeologists discovered human and animal remains that show parts of Stonehenge were burial sites. This is confirmed because the blue stone pillars are burial markers.

Those pillars have also driven once of the site’s most memorable features.

The slabs of stone align perfectly with the sun during summer solstice. Researchers think that Stonehenge and the surrounding monuments were also a place of worship for the ancient locals. The megaliths and their arrangement show the ingenuity of the people who lived during that era. They were a Neolithic civilization that worked together and used the tools available to them. The site is both a monument to ancient architecture and lifestyle.

Tourists come from all over the globe to visit Stonehenge, especially during the solstice season.

The UK does have a system in place for maintaining the structures, as well as not disturbing it unless necessary. Some of the maintenance strategies include keeping the grass cut and pathways clear of clutter and debris.

Along with the local government, UNESCO helps protect and maintain the site. According to the organization, understanding of the standing and buried remains “continues to be developed.” The organization references projects like “Between the Monuments” as one of the methods to protect Stonehenge.

But Stonehenge as we know it can be in trouble.

Currently, the United Kingdom has approved a tunnel to be built very close to the old landmark. Sections of the nearby A303 will be closed and replaced by the tunnel, said to be a part of the £1.6b road improvement. That’s over $2 billion in US currency. The government says that the tunnel will ease congestion, as well as preserve the authenticity of the prehistoric site.

But, critics of this plan say that the British government has not investigated this enough and considered experts on the matter.

Some officials are critical of this move for a few reasons.

Possible damage to the ancient ruins is one of the key issues. The construction could reduce the underground water sustaining the lush greenery of peat moss and silt.

Another concern lies in the fact that we haven’t fully explored the surrounding area. Further evidence, such as footprints, are in jeopardy of being missed or overlooked during the construction of the tunnel. These findings would provide more background information of the people who built Stonehenge and how they lived.

Construction machinery also poses a risk to the region.

The government is already complaining of the amount of vibration caused by nearby traffic. This is highlighted by the A303, a road that already prevents many tourists from getting a pure look at the site. The construction vehicles and large machines used to carve the tunnel could only make the situation worse. Machinery could jar the ground beneath the site, causing them to become unstable and potentially fall.

Before any final changes are made to the site, it appears the UK’s Department of Transport will do more research.

Do you have any questions about Stonehenge or the other World Heritage properties? Let us know in the comments, or via Facebook and Twitter.