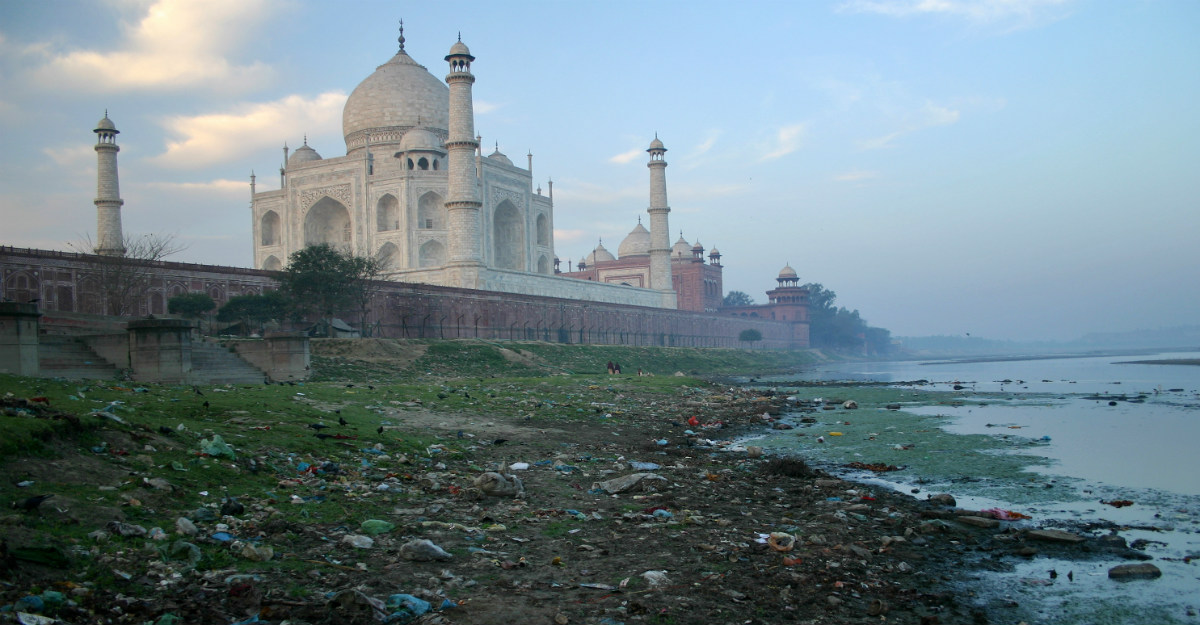 The Taj Mahal is one of the most recognizable landmarks in Indian history. Millions of tourists travel from around the world to visit the vast white tomb that’s now a World Heritage property.

The structure sits across 42 acres and was built as a sign of love from Emperor Shah Jahan for his favorite wife, Arjumand Banu Begum, also known as Mumtaz Mahal. The construction of this memorial began in 1632 and took 16 years to complete. Emperor Jahan commissioned all kinds of artisans to build and add intricate details to this monument to his wife. The craftsmen that built the Taj Mahal came from all over the region, including Central Asia and even Iran.

The Taj Mahal is symmetrically perfect in addition to the outer buildings and lush gardens. The exterior walls are made of white marble with abundant use of many different stones on the interior walls. Those stunning walls come from a mix of semi-precious and rare stones. It’s those rocks that give the Taj Mahal a stunning color, on both the inside and outside.

But, like any centuries-old structure, some upkeep is needed to keep the Taj Mahal looking the same.

Since it’s construction 370 years ago, the structure has been exposed to excess amounts of pollution. This has only become much worse in recent decades. As the Indian state of Uttar Pradesh experienced rapid industrial growth in 1980s and 90s, pollution only increased.

Uttar Pradesh is the most populated state in India with about 200 million citizens. Because of the growing population, businesses, and automobile pollution, the Taj Mahal began to turn a dingy yellow on the outside.

It’s not just the pollution that’s hurting the look of this structure.

The Taj Mahal lies on the Yumana River, and the insects that breed there have found their way to the interior. The interior provides shelter from the elements, and the insects defecate on the walls and leave a terrible greenish hue.

How can the local government keep the Taj Mahal looking beautiful? With a technique that humans use.

The structure receives a mud mask to restore much of the color and shine on the exterior. They have been using the technique since 1994 with marked improvement since that time. Just as a mud mask cleanses the pores of the skin, so the mud cleans the impurities off the Taj Mahal.

The key is mud that’s made of a paste called “Multani mitti.” While the site isn’t back to its natural color yet, officials are encouraged by the progress with this special mud.

The Archaeological Survey of India oversees the maintenance of the Taj Mahal. There is a law in place that specifies that the Taj Mahal is protected from pollution that’s more than 4,000 square miles away.

Back in 1996, the Supreme Court of India banned the use of coal in the nearby Taj Trapezium Zone. This required local industries to either use natural gas, or move their business away from the Taj Mahal.

The insect problem is more of a recent issue. The river needs immediate attention to clean and remove waste. The hope is that these changes could destroy and repel the insects showing an interest in the monument. As with the pollution and damage to the stones, the local government may take action to protect the structure from those bugs.

Do you have any other questions about the Taj Mahal and efforts within India to keep it maintained? Let us know in the comments, or via Facebook and Twitter.