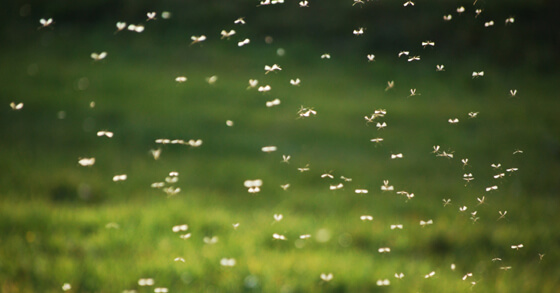 Brazil is taking a radical step forward in eliminating its dengue fever problem: releasing thousands of mosquitos. But, before you think that the country has lost its mind, know that these aren’t regular mosquitos. The British biotech firm Oxitec has genetically modified the bugs to prevent them from spreading the disease.

Oxitec’s plan is simple. The genetically modified strain is male only, and these mosquitoes will seek out a female mate. Their offspring inherit the genes that ensure they cannot spread dengue fever. These offspring die before reaching maturity. Perhaps even more interesting is that the strain contains a gene that leaves a florescent marker on the mosquito, so researchers can easily track the spread of the strain.

The hope is that enough mosquitos will find mates and be able to create enough dengue fever free offspring to reduce the number of cases throughout the country. As of now, Brazil is the international leader in dengue fever cases.

Trials have shown that the release of the dengue-free males into areas have greatly reduced the population of mosquitos and, in some cases, have even eliminated mosquitoes from the area.

Brazil is the first nation to allow the release of these genetically modified mosquitoes, but successful trials have been carried out in varying locations throughout the world. Brazilian officials are hoping to lower the number of dengue fever cases before the Olympics are held there in 2016. India is also currently working with Oxitec to produce a similar program.

No studies show what the long-term effects of these types of programs could be on ecosystems, but it is certain that they will help curtail dengue fever in the short term. There is also the exciting possibility of using this methodology to reduce the spread of malaria.

Dengue fever is a disease transmitted to humans by infected mosquitoes. It can be fatal if untreated, and it affects as many as 400 million people annually, according to CDC estimates.

For more information on dengue fever and what you can do to prevent it in your travels, contact a Passport Health Travel Specialist via our website or by calling 1-888-499-PASS (7277).