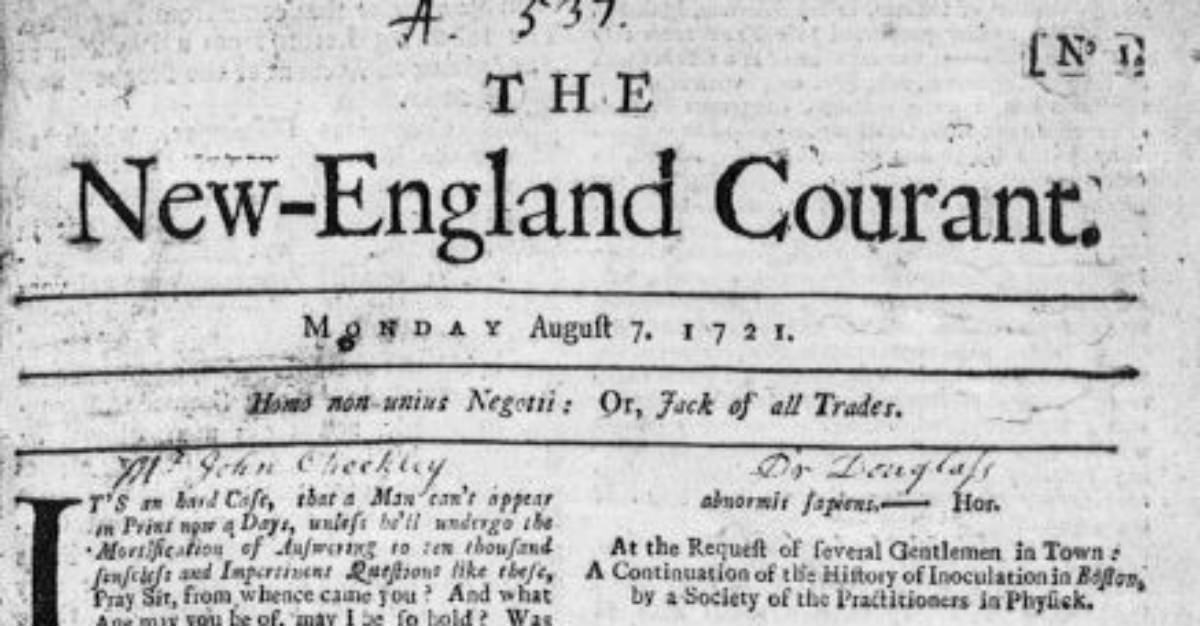 It seems we have smallpox to thank for freedom of the press and some other innovations.

In 1721, a smallpox epidemic swept through the streets of Boston – the worst in the city’s history. Fatality rates rose to as high as 30 percent or worse. Native American populations were hit even harder, with rates up to 90 percent. How could anything good come from such a devastating disease?

In his book, “The Fever of 1721,” Stephen Coss claims that the Boston smallpox epidemic actually played a major role in stopping the spread of the disease, starting America’s first independent newspaper, and preparing the way for the American Revolution.

Boston was experiencing tension and conflict on several fronts in 1721. There was growing political tension between the local-elected House of Representatives and the British royal governor. According to Coss, that political discord may have been one of the main reasons that smallpox spread so easily. The officials couldn’t come together and agree on a plan to nip the disease in the bud. There was also a major conflict amongst the general public about a medical procedure called inoculation.

A man named Cotton Mather had read about the procedure in a scientific journal of the time. Inoculation involved injecting smallpox pus – the live disease – into an uninfected person. It was a mild, survivable case of the disease and made the person immune to a more severe case in the future.

Inoculation was like vaccination. But, with vaccination the person is injected with a harmless form of the disease to trigger an immune response. This inoculation was being used in Constantinople to protect against smallpox.

Mather, who was already infamous for his role in the Salem witch trials, spoke openly about this new idea. The only person willing to try it was a country doctor named Zabdiel Boylston.

Many in Boston were angry that the two men would try such a thing. In fact, both Mather and Boylston’s lives were threatened.

It was in this unstable and tumultuous environment that James Franklin, Benjamin Franklin’s older brother, started what would become the first independent newspaper in America.

According to Coss, Franklin started the newspaper because he saw an opportunity to join in the debate on the side of anti-inoculation and make money off the fears of the public. He also wrote about other political and social issues, all with a good amount of wit.

Coss says that Franklin’s paper, the New England Courant, could be compared to things like The Daily Show, The Colbert Report, or The Onion.

Benjamin Franklin made his debut in his brother’s newspaper. He began to write funny articles that made fun of various social institutions and practices, all under the name “Silence Dogood.”

During this time, Benjamin Franklin “learned all he needed to know,” Coss told Public Radio International. Coss claims that 1721 shaped Franklin’s opinions on the freedom of the press and his ideas about politics.

Franklin learned about the inoculation experiment going on between Mather and Boylston, and became a huge advocate for inoculation in Philadelphia – maybe even the biggest in all of the colonies, according to Coss.

Philadelphia became the center for inoculation. The two men that advised George Washington as commander-in-chief of the Army supported inoculation. They convinced Washington to require all soldiers be inoculated. According to Coss, many historians believe this was Washington’s biggest contribution as a general in the war.

The smallpox epidemic in Boston in 1721 created major ripples in the American revolution. So it’s true that good did come out of such a major disease. But, let’s hope history doesn’t have to repeat itself in this case.

Check out our United States blog for the Salem witch trials’ effect on the first smallpox vaccine.