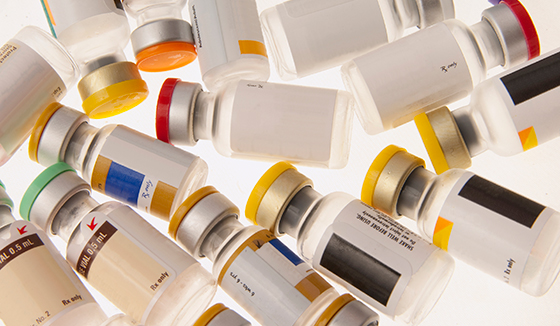 Measles is, without a doubt, a fairly scary virus. In 2014, there were just under 200,000 measles cases confirmed by the World Health Organization across the world. That number is about 92 percent less than where it was in 1980, when 2.6 million cases were reported. This decline is attributed to one thing: measles vaccination.

The WHO, Centers for Disease Control, and medical organizations all around the world plead with parents asking them to get their children vaccinated to avoid measles and other deadly diseases. However, despite numerous studies showing that vaccines are safe, some individuals claim that vaccination is unsafe and can cause serious side effects. These voices are generally loud, and involve many Hollywood stars who receive significant international attention despite espousing often ill-informed beliefs.

But, there are some famous and well known individuals who have touching and important stories about the safety and importance of vaccines, beliefs backed by literally hundreds of studies proving that vaccines not only work, but have few to no harmful side effects and will save lives.

Children’s author Roald Dahl shared his story about measles in an open letter that can be read in full on his website. Written in 1986, Dahl recounts the story of his oldest daughter, Olivia, who died of measles in 1962.

Roald Dahl dedicated his book The BFG to Olivia’s memory.

Olivia, who was only seven-years-old, had developed measles encephalitis from her infection, an uncommon but often lethal complication. At the time, no measles vaccine was available. Dahl’s impassioned plea for parents to vaccinate is as informative as it is heartbreaking:

“[T]here is today something that parents can do to make sure that this sort of tragedy does not happen to a child of theirs. They can insist that their child is immunised against measles. I was unable to do that for Olivia in 1962 because in those days a reliable measles vaccine had not been discovered. Today a good and safe vaccine is available to every family and all you have to do is to ask your doctor to administer it….

“Here in Britain, because so many parents refuse, either out of obstinacy or ignorance or fear, to allow their children to be immunised, we still have a hundred thousand cases of measles every year. Out of those, more than 10,000 will suffer side effects of one kind or another. At least 10,000 will develop ear or chest infections. About 20 will die.

LET THAT SINK IN.

Every year around 20 children will die in Britain from measles.

So what about the risks that your children will run from being immunised?

They are almost non-existent. Listen to this. In a district of around 300,000 people, there will be only one child every 250 years who will develop serious side effects from measles immunisation! That is about a million to one chance. I should think there would be more chance of your child choking to death on a chocolate bar than of becoming seriously ill from a measles immunisation.

So what on earth are you worrying about? It really is almost a crime to allow your child to go unimmunised.”

Though written nearly 30 years ago, Dahl’s plea and logic are still relevant for us today, and he does not stand alone. One Hollywood mother has made it a priority to have her children vaccinated.

“It’s a very simple logic: I believe in trusting doctors, not know-it-alls.”

In an interview with The Hollywood Reporter, actress Kristen Bell made it absolutely clear how she feels about the issue.

“When Lincoln [her first child with husband Dax Shepherd] was born [in March 2013], the whooping cough epidemic was growing, and before she was 2 months old, we simply said [to friends], ‘You have to get a whooping cough vaccination if you are going to hold our baby,'”

The actress doesn’t back down when it comes to vaccination; she has been very outspoken on Twitter about her feelings.

Even the great men who helped build the United States were proponents of vaccination. Multiple histories and journals show that not only were men like John Adams and Thomas Jefferson pro-vaccination, but they supported Gen. George Washington’s decision to mandate that all of the troops in the Continental Army be inoculated against smallpox, a very controversial decision at the time.

The foremost proponent of this form of vaccination was Benjamin Franklin.

Franklin had many reasons to stay silent about vaccines, family being a primary factor. His brother, James, openly opposed the action and wrote about it in his newspaper, The New England Courant. The scholar was not persuaded, however, and he spent most of his life collecting documents and studying the importance of inoculation, in large part because he had lost a son to smallpox.

Franklin’s son, Francis, died when he was four. Due to a childhood disease, the boy was unable to be protected against the smallpox virus. Franklin regretted this for the rest of his life, saying in his autobiography:

“In 1736 I lost one of my sons, a fine boy of four years old, by the small-pox, taken in the common way. I long regretted bitterly, and still regret that I had not given it to him by inoculation.”

“This I mention for the sake of parents who omit that operation, on the supposition that they should never forgive themselves if a child died under it, my example showing that the regret may be the same either way and that, therefore, the safer should be chosen.”

For more information on measles and other vaccine preventable diseases, see our page on the subject. For in-depth information on vaccine safety see this CDC page.